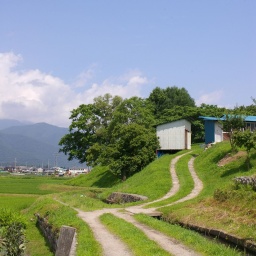 tatsu returned to the bump side. This contains the tracks from December 2006 to February 2007. The first two tracks joined the label compilation : "ennui" is included in tropic's "one / volume 1", and "northwood" is in "la vie future" from stratagem. After "el tren" closes the minimal side of this release, "living room" opens the warmer side. Following a bumping tech-house "twilight", warm chill tune "siesta" closes this album. The bonus track "citrus" is another version of "station", included in "space travel EP".

Net-Label Review
Tatsu, the brains behind Bumpfoot, brings us some minimal ambient techno. The album contains 7 tracks all of which are superb pieces of music. The music is lush and laid back, slow and funky and gives you sound with enough pulse to put you in a trance like state. ;) I can't help but feel a lounge sort of feel to all the tracks. Almost all the tracks would go down in a chill room, as background music after a long days work or even something to play during conversation with your friends after dinner. It's sort of dance-able and chill-able at the same time... a few of the tracks are a little louder and more beat driven than the rest and they might even work as opening tracks for a dancefloor. All the tracks are enjoyable and the production is spot on. It comes as highly recommended and it's free, so you don't need to mortgage your house, take out a loan or even use your credit card! All you need is some bandwidth and believe me its good value for your bandwidth (so download it ;)
wundertunes
Wisteria Field, release 30 from Bumpfoot comes from the brain behind this label himself: Tatsu. The album contains 7 tracks of warm, deep, chilly music. The dancefloor meets the living-room meets the lounge on this album. Tracks are well produced - sometimes a bit too well, but thats more than ok. An album for sitting around and chilling with good friends, sitting in your favourite lounge bar and car-driving into the sundown.

"northwood" became unavailable in creative commons license, but will turn up in next logical evolutionary step.