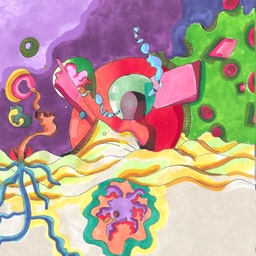 Word Salad Homunculus by DJ Saint-Hubert consists of 12 experimental tracks. "I made the album in Jeskola Buzz mostly using a plugin called Blok Modular, and then in Reaper for post-production. It is basically ambient techno with some acidic sounds. A lot of the synth sounds are Pulse Width Modulation on a sine wave, which I don't think a lot of synths are capable of doing. It basically tilts the sine wave up or down. I also developed my own Reaper JS plugin for mastering the album, it's a kind of spectral saturation. As with my more recent albums I have been inspired by meditation which I have been doing for the past few years. I try to make sounds that I can meditate to that maybe work better than silence. As for influences, people compare me to Aphex Twin, and I think if anything the album sounds like Selected Ambient Works 85-92. I consider this album more accomplished than my previous album Sacred Mangosteen Temple as my setup was more cookie-cutter in Mangosteen Temple and was more concerned with releasing a lot of tracks."