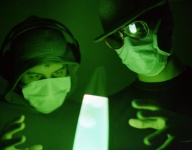 Cldscp (calidoscopio) is a duo of songs with electronic textures composed of xD & ^^. It was created in Buenos Aires, Argentina, in 2007. Their first album "Plug" was released in March 2008. In August they released "Dead in Tokyo", a four songs album, including two covers (something in the way of Nirvana and Wandering stars of Portishead). In 2009 they released 4 new albums. "Lemmings" in March, "12pm" in May, "Puedo morir de amor" in August and "Depressing karaoke bar" in October.