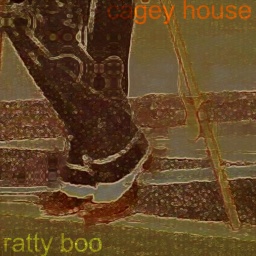 This is the second release of Cagey House (the third one of Dave Keifer). He shows you another miraclous world. "The idea with these tracks was to come up with things that were fast, loose, and fun. Or at least faster, looser, and more fun that the stuff I'd been coming up with previously. To that end the tempos are generally quicker, and the drums more prominent in the mix. I tried to avoid any soft sounds - anything that seemed acoustic or natural was banished. I also tried to emulate old tape techniques - like jump cuts, and non-linear overdubs, and weird speed and pitch manipulations, which gave things a nice delirious edge. Also, Elaine DiMasi added a really cool spoken word part to Pigeon Perch Porch, which made that song a lot more fun that it would have been."