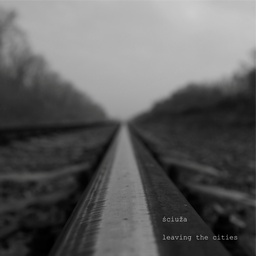 Sciuza's debut album "Leaving The Cities" contains three tracks united by thematic concept. It is theme of way from the contemporary city to the nature freedom. Album's idea was influenced by Sciuza's hometown with its industrial areas. The first track "Leaving The Cities" is based on ambient textures with many different sounds of the city's life. Next track "The Forest Road" is more mystic sound, inspired by atmosphere of the night forest and starry sky. The unlimited sky added to this track cosmic accents. And the last track "The Mountain And The Sea. Meeting Of The Solitudes" has most coldest sound on the album. It is mirror of silent atmosphere of seas and mountains, which embodies eternity of universe. Artwork by Sciuza.