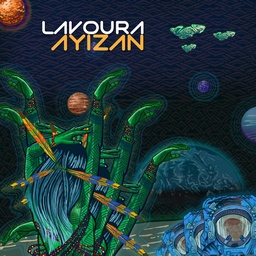 Formed 16 years ago, Lavoura is a reference in future jazz made in Brazil. The group debuted two more songs, after a series of singles started in 2018. "Ayizan" is the first single. Climatic, the track brings in its DNA the Brazilian rhythm and the psychedelia, amplified by the arrangements and the accurate production, that confer a certain epic tone to the sonority, without losing the characteristic groove. The other single, "Bossa Exploitation", refers to the anthropophagic research involving African music. It is the result of impromptu sessions that the group held between 2017 and 2018. Integrated by composers, producers, arrangers, beatmakers, musicians, visual artists and inventors, Lavoura makes a cinematic sound, referenced by the rhythm science and inspired by the concepts of phusion (fusion of the 21st century) and psychogeography, transform spaces in sensory experiences).