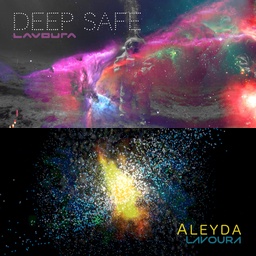 We received 2 tracks from Lavoura, and decided to release them as a "double-sided" EP.

Deep Safe is the new Lavoura collective's track, produced during the Covid-19 pandemic. It is the first single to be released in a series that is being produced by its members remotely, each from their home studio. Based on influences of electronic music, Deep Safe dialogues with deep house - subgenre of house music - and with french touch. It brings a more dancing and hypnotic footprint, without losing the jazzy, psychedelic and futuristic essence. The production process was initiated by Fernando TRZ, on the pianos, who composed a backing track, following the recording of the overdubs, one by one, recording from their homes, first Marcelo Monteiro on saxophones, then Thiago Duar on guitars, Caleb Mascarenhas a.k.a. Zydron on synthesizers, Paulo Pires on drum machines and beats, and, finally, Junião on percussion and effects.

After Deep Safe, Aleyda is the new single from the collective Lavoura. The two tracks are marked by bringing together electronic music and jazz, a characteristic of the group. The sonority achieved is formed by multiple layers, at the same time that it is structured as a flow. Based on influences of spiritual jazz, electronic music, broken beat and downtempo, Aleyda is inspired by Wayne Shorter, Alice Coltrane, Sun Ra, Cinematique Orchestra, Jazzanova, 4Hero, Bugz in the Attic, Kaidi Tatham, IG Culture, Mark De Clive Lowe, Quantic. The production process was started by Thiago Duar, on bass and guitar, who composed a guide, in the preceding sequence the recording of the overdubs, one by one, recording from their homes, first Fernando TRZ, on the pianos; Marcelo Monteiro on saxophones and flute, after Caleb Mascarenhas also known as Zydron on synthesizers, Paulo Pires on electronic drums / beats, and, finally, Junião on percussion and effects. "Aleyda came from a root to contemplate time. The moments in the middle of the pandemic chaos, finding an inner peace was necessary. Aleyda was born from this inner search", says Duar. As well as a river of multiple affluents, jazz, electronic music and Brazilian music are expressions of diversity and freedom. They are technological tools for solutions and struggle.