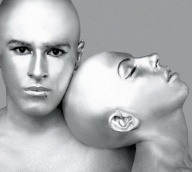 Dharmatec was born in June 2008 when singer and composer Sol Taranto, after recording solo material, embarked on a new project with musician and composer Leonardo Canizzo. Even though she utilized electronic music as an intense part of her solo project, both of them creates an interesting fusion between aesthetic and sound of electronic music itself, achieving an excellent artistic level that invites to the sounds of Trance, Psycho and Progressive House, among others.

On January 2009 Dharmatec recorded their first homonym album, along with the prestigious music and producer Marcelo Del Paggio, and the EP "Justify my sin", a shorter digital version of the album. They are currently scheduling their tour dates in the circuit dance of Buenos Aires and planning future concerts in several cities from Europe since April 2010.