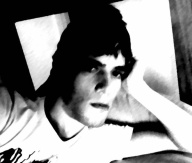 Nicolás Alonso (a.k.a. Nic Hurryn) was born on August 7, 1988 in Buenos Aires, Argentina. From an early age he has had a big musical influences thanks to his father who since childhood has made him listen to great artists like Emerson Lake & Palmer, Deep Purple, Rush, Yes, Pink Floyd, and other artists. At 8 he began his studies in music classes at the keyboard which developed his first knowledge and he knew all kinds of music. He bought his first keyboard Yamaha PSR-190 simple but complex for an 8-years boy. Thanks to his teacher could develop a good musical ear and in 1998 entered to the National Conservatory of Buenos Aires for experimenting with piano lessons that were of great support for him. Then he has to change the place of study and enters the Conservatory of Music "Manuel de Falla" where he had lessons again with his first music teacher. Later he let his study in that place. In the early 2002 retakes the music with particular classes where he met the first programs like Rebirth RB-338 and also the first midi controllers. In 2005 he heard the first songs of electronic music and it reveal a new world for him. After a while he was looking for his favorite genre and have been major influences of techno, experimental, IDM, deep house, electroclash, break beat, trip hop, booty-house and dubstep. In 2007 known innovative programs which will open the door to the production of techno music with experimental touches and some acid. So actually he grows in his music and paralelly discover the new vanguardist music.