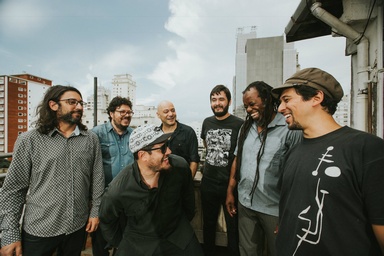 Created in 2003, named after the novel Lavoura Arcaica by Raduan Nassar, in the context of sample culture and the aesthetics of arrastão, Lavoura has always worked in the frontier areas of electronics, jazz, popular culture, indigenous and African heritage. In 2005, two years after being created as a duo and releasing the demo Raízes Aéreas (2003) and the album Máquinas Híbridas (2004), the group established itself as a quartet and started to sound more organic, mixing 1970s grooves with electronics and approaching of subgenres such as soulful jazz, nu jazz, broken beats and future jazz. This quartet lineup lasted nine years and resulted in Kosmophonia (2008) and Nu Steps (2011). The group went on to become a quintet in Photosynthesis (2014) and a septet in the singles series, which began with "Ametista" and "MM Moods" (2018) and continues with "Ayizan" and "Mãe D'Água (Bossa Exploitation)" (2019). The new compositions represent a breakthrough in relation to the rhythmic, harmonic and melodic complexity. By blending genres, styles, territories and ambiences, Lavoura goes beyond rankings and creates soundtracks for imaginary movies.