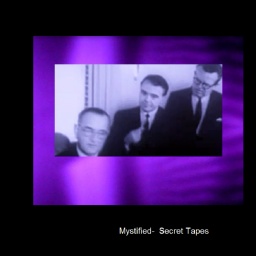 "These are 10 pieces of electronica and techno featuring old recordings of US President Lyndon Johnson from the 1960's. These were secret tapes he made in the White House of himself with guests. I call the recordings Secret Tapes." Mystified told me so, then I was curious how he created this interesting "session", how the recordings came up and how he met them. "From Mystified's sources, the recordings of President Johnson were made in the White House during his term in the 1960's. Like Richard Nixon, he liked to tape some of his telephone conversations, and a copy of these recordings survived after he left the office. These recordings were then digitized, and Mystified has (legally) appropriated them for his recordings." Again, here are 10 cuts of session by Mystified and Lyndon Johnson. Combinations of hypnotic tracks and presidential recordings.

Disruptive Platypus
Mystified is no stranger to my listening habits. On my iPod is Altered Signals (Dark Winter) and the Bump Foot releases of Aluminum Fly and Endless Flutter. And with work such as Secret Tapes, my guess is that he'll continue to be a digital presence for a long time. This recent release on Bump Foot takes the secret White House tapes of President Lyndon Johnson and scores them with subtle beats and ethereal sounds that wrap the words in a certain foreboding.